Humberston is an outstanding academy proud of our exceptionally high standards and traditional ethos. We offer a diverse enrichment programme in order to develop skills outside of the classroom.

1500 students from across our Trust compete at annual Summer Cup 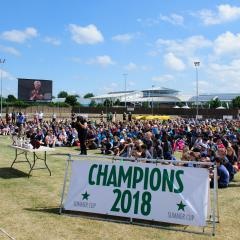 Over 1,500 student athletes from across the David Ross Education Trust came together to compete in the Trust’s annual Summer Cup – the pinnacle of its sporting calendar that celebrates and recognises participation, dedication and team-spirit.

Held at the Grantham Meres Stadium in Lincolnshire, the magnificent sporting festival saw students from the Trust’s academies compete in a number of events including athletics, swimming, hockey and table tennis, in a bid to secure the prestigious Summer Cup title.

The spectacular event saw a host of sports legends in attendance, who were on hand to inspire and support the students as they represented their academies with pride and passion. The star-studded line up included Jonathan Edwards CBE, Colin Jackson CBE, Mark Lewis-Francis MBE, Sally Walton, Joe Roebuck, Jenny Meadows and Marilyn Okoro.

He said: “The David Ross Education Trust’s Summer Cup is a truly inspiring and outstanding sporting event.The young athletes who took part are an absolute credit totheir schools and local communities. I am sure that in the years to come, we will see some of this year’s Summer Cup competitors representing our country as part of the next generation of future sports stars.”

Former Olympic hurdler and BBC commentator, Colin Jackson, also returned to the Summer Cup as the event’s official commentator. Colin was on hand to interview students after their events, with live footage aired on the largest TV screen in the UK.

Colin said: “I love coming to the Summer Cup and was delighted to commentate for the third time. It’s all about taking part and trying your best and the 1,500 young athletes are superb role models. There weren’t opportunities like this when I was at school and dreaming about competing on the world’s stage. It’s a great credit to the David Ross Education Trust that they’re leading the way.”

Rowena Hackwood, Chief Executive Officer at the David Ross Education Trust, said of the day: “The Summer Cup gives our students the opportunity to listen and learn from sporting legends. This year, we couldn’t have asked for more with our superbly talented and committed young athletes being roared on by their classmates, parents and our very special guests.

“The pride our students have in representing their schools is superb. It is also wonderful to see students from our schools all cheering each other on.”

The annual Summer Cup is just one of many highlights within the Trust’s pioneering enrichment programme that aims to motivate young people to become their confident, academic best.

The David Ross Education Trust Inspiration Fund is used to create thousands of incredible opportunities for the Trust’s 13,000 students, helping them to develop their passions and discover their talents.

HOW YOU CAN HELP THE INSPIRATION FUND

If you would like to find out how you or your organisation can support the Inspiration Fund, please contact James Russell, Director of Communications & Public Affairs at the David Ross Education Trust by emailing JRussell@dret.co.uk

You can also make a donation to the Trust’s Inspiration Fund JustGiving page, where all proceeds are used to create outstanding opportunities for its 13,000 students.